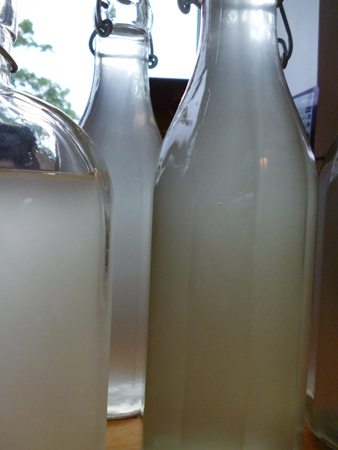 Considering one of the books I am conserving for my major project is a recipe book, I have been dying to try some of them out! Unfortunately due to all the project work, I haven’t had time until now! So this weekend (along with a fun day out) I set about making some ginger beer from The Book of Puddings. The plan is also to have some of this at our end of year show – so it was important to try it out first!

The book has two recipes for ginger beer on the same page, one written by the author and one from a newspaper she had cut out and stuck in. Considering I was only trying out a small batch, I have gone for the newspaper recipe that makes one gallon, rather than two.

Having bought myself some bottles (Lakeland, £4.99 each – fabulous!), and some yeast and cream of tartar, I set to work (thankfully a fellow student pointed out that this was a baking powder and not the cream tartare that goes on scampi, otherwise this ginger beer could have had a very different flavour!).

I’ve written out both recipes here, as the writing is not that legible so small.

Add the other ingredients when mainly cold, add 2 tbs of yeast on toast and let it stand for  12 hours

For one gallon:
1oz of bruised ginger
1lb loaf sugar
one lemon
two tsp of cream of tartar

First was to add a bruised ginger to lemon, tartar and sugar. Not being familiar with ‘bruised’ ginger, I bashed it with a hammer a few times, though I may have been a bit over zealous. Also the loaf sugar was replaced with caster sugar, as I forgot to get this at the supermarket.

I realised from the instructions in both recipes that the yeast had to be spread onto toast, and that the fast action yeast I had was not quite the right stuff. I tried reactivating it with a recipe from Mikes Brewery, but I’m not that sure how well it worked, it was more of a liquid than a cream. However, not to be deterred, it went onto the toast, and into the mix!

24 hours and much anticipation later, I sieved and bottled it. Then for the sampling! I think it is supposed to sit bottled for a few days, so I will be sampling some more soon to see if that’s even better!

Well its a bit sweet, so I do think it needs time to sit.

Some days have passed, and it is still a bit sweet, and considerably reduced in quantity, as I omitted to tell The Man that it needs time to brew, and he has been merrily drinking it away!

I might try with some better yeast for the show and proper loaf sugar to see if it makes any difference.