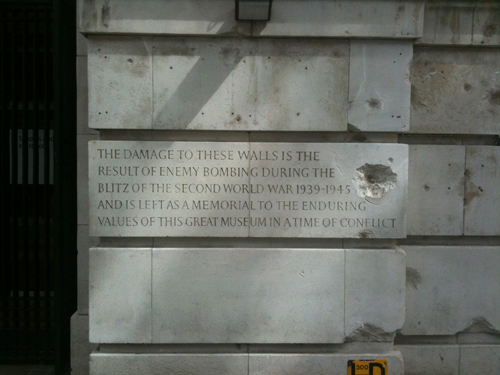 I know it might be yet another post about the V&A, but at the moment I seem to be spending quite a bit of time there, and have now seen a few interesting things! The National Art Library seems to be a hive on interest and exciting happenings – almost like toys that come to life when you’re not looking, the National Art Library leaps into action on Mondays when it’s closed to the public. A couple of Monday’s ago saw the BBC filming a piece in the library on armour and how it was made, as the library itself makes such a good backdrop – so watch out for that on your screens as I may be in the background!

A week ago I witnessed the changing of the Art Library’s light bulbs – an amazing feat, and (perhaps sadly) I’ve often wondered how they did it. Well now I know – They’re all done on a pulley system – there’s me imagining someone on a big step ladder precariously tittering on the edge whilst attempting to remove the glass globes – this in fact is not what happens at all – someone on the roof of the library winds down the pulley and the chandelier comes down all together so that they can all be changed whilst standing on the floor! I don’t think it happens all that often, so here are a couple of pics!

Lets not forget the quilting circle the meets on a Monday in the library – like I say a bustling place! I haven’t yet managed to join them with my quilt, which I should probably do, as they do look like pros!

Another interesting part of the V&A that perhaps everyone may not notice as they rush to get into the building itself, is the external wall which faces the Science Museum. Here you will see a scattering of craters in the wall itself, looking a little like a deteriorating wall. The wall is far from deteriorating, but it may take a moment to notice the plaque below stating that these are the result of the Blitz during World War II, which have been left as a subtle yet poignant reminder to the war.

And finally, as you walk down Exhibition Road towards the Royal Albert Hall, and take a left just after the V&A, you’ll find a little hubbub of activity around the LSE campus, including The Queen’s Tower, built to mark Queen Victoria’s Golden Jubilee in 1887. Nearly demolished in the 60’s, it was rescued by the Victorian Society and John Betjeman, and is now all that remains of the Imperial Institute that once surrounded it!

So after the excitement of the Rolled Object Project over at the V&A, and a well deserved rest on the following bank holiday Monday, it was then back to work as usual at the V&A on Mondays.

These past two Mondays I have been back in the National Art Library making full flap covers for the collection of Vogue magazines that the V&A has. These are particularly popular items that are regularly requested at the library so are having covers for extra protection and to prevent any red-rot. This has been excellent practice for me as I have not done one for a while. Some pics from the covers:

You should be able to see here how extensively the wraps cover the book, not only do they got over the foredge, but the head and tail of both sides as well. After some practice I have honed my technique and no longer fully cut the corners of the flaps, which you can see in one of the close up images, this is a great technique to use to ensure the corners are covered, which can sometimes be tricky when fully trimming the edges.