Over the last couple of weeks, we have had a team of expert craftsmen from the British Library come in and teach us knife sharpening and leather pairing – it has been FANTASTIC!! I’ve never done either and have been thoroughly enjoying myself! Leather, as many of you will know, is an amazing medium to work in and gives and extremely satisfying result! It also seems to work sooo much better with a nice sharp knife, so the two have been going very well together.

As you’ll know from my tools post, I’m very fond of my kit, and there is nothing quite like having a tool that you can mould exactly to the form you want to, so I have been slowly sharpening and  honing my pairing knife, which is used to take off the edge of the leather before you pair/thin the rest of the leather (edge pairing!). I have also been given a spokeshave by my wonderful father – a tool which is used to thin down the rest pf the leather. This particular tool was designed for woodworking and needs a bit of manipulation before it can be used for leather pairing – which is going to take me a few weeks… Anyway, here is a video of Mary sharpening her pairing knife:

Having tried out pairing and knife sharpening, I decided to give a case binding a go in leather, as my sister is after a book for her PhD for her acknowledgments. Unfotunately I ripped the spine piece after two hours of pairing, but I suppose that is what practice is for. I decidied to still use the leather due to a lack of dark green and plans for the cover, but its a bit sad!

Though all in all not as sad as missing out the N in ‘acknowledgments’ on the spine itself, after my VERY first attempt at blind tooling. Neither of which are remotely as disappointing as it was to find out I after speaking to my sister that I also had too many E’s – HOPELESS! 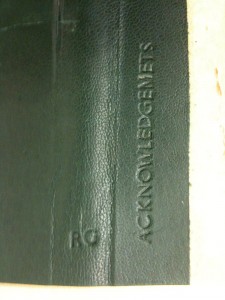 Anywho – bit of a long post today as its been a while and lots has been happeneing – will update quicker next time and will put the finished acknoweledgemets up soon!

PS – I now have a ‘page’ on facebook so I can put up events and spread the love so come and have a look if you’re keen.