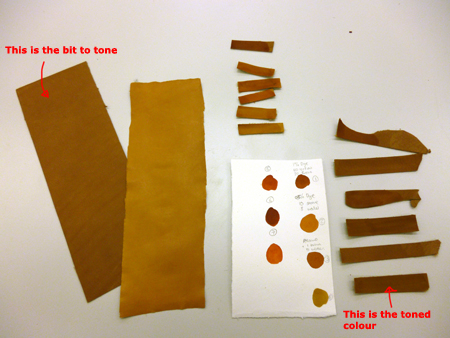 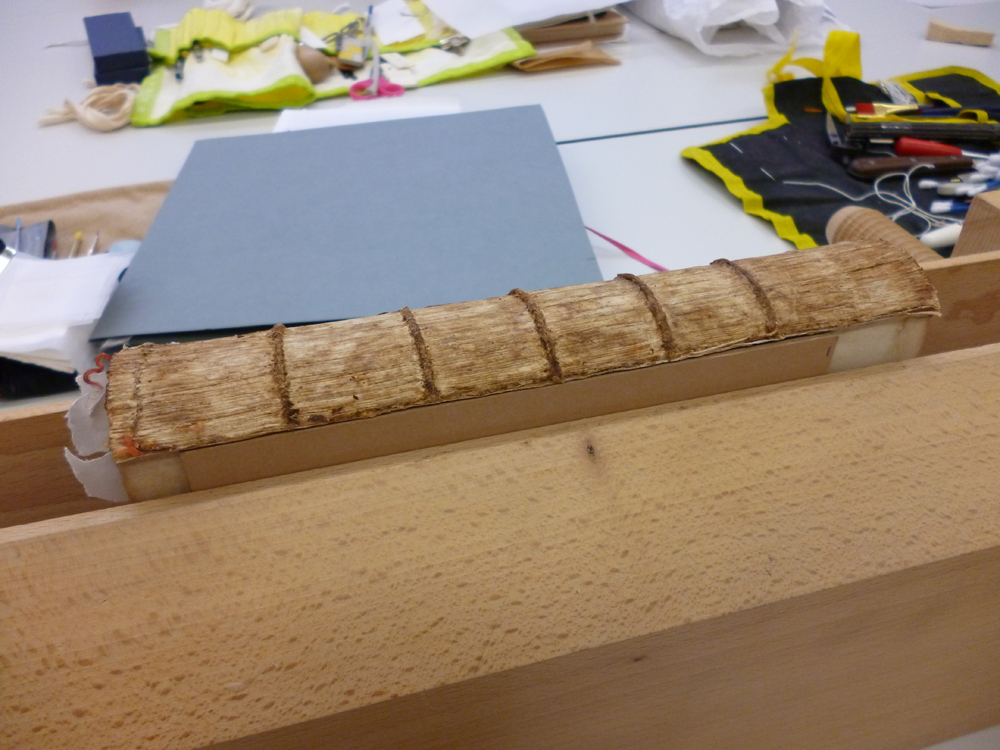 Having toned some japanese tissue for my repairs to the cover of this book, the next steps were able to happen in conjunction in one another, and I have been working on them steadily. Unfortunately it was at these following points where some hiccups occurred. My colleagues tell me that you learn more if you make mistakes to begin with, though I can’t help feeling a little disappointed in myself.

Having discussed various options with my tutors, we decided that I would remove the spine of the book as it is severely deteriorated and crumbling away. It would also give me practice in spine removal. If this book was of great importance, it is unlikely the spine would be removed and would be worked around. In order to save the spine, I used a Klucel G gel to adhere a strip of japanese tissue, this way, when lifting the spine, it will remain in tact and can be pasted back on again once I have completed the reback. 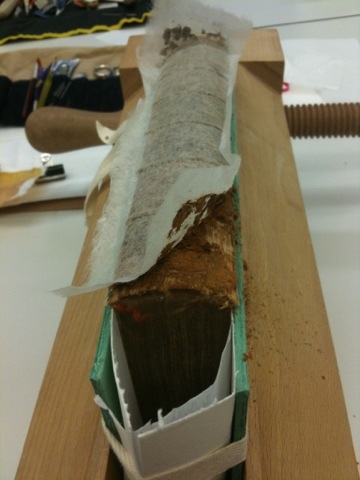 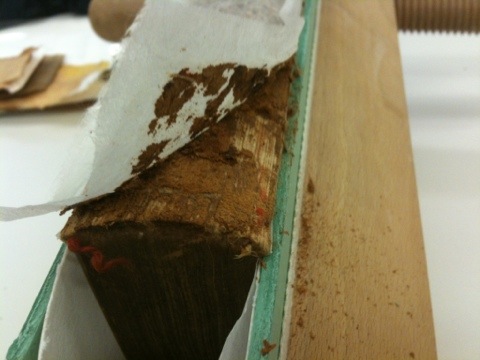 Unfortunately, this was the first thing that went wrong, as the spine was so deteriorated, it was not lifting and instead was crumbling rather than coming off in one piece. This meant that having got what meagre bits off that I could, the remainder of the spine would have to be lifted with a poultice and would be unsalvageable. 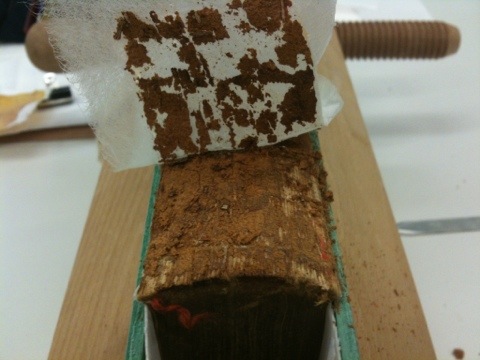 So I started a full spine removal with the hope of using methyl cellulose, but realised once I started to make it that it would have to be left for 24 hours, and unfortunately on the following day, it was much too runny and adding more methyl cellulose meant waiting another 24 hours. It was at this point I moved on to a wheat starch paste poultice, which I found worked well. 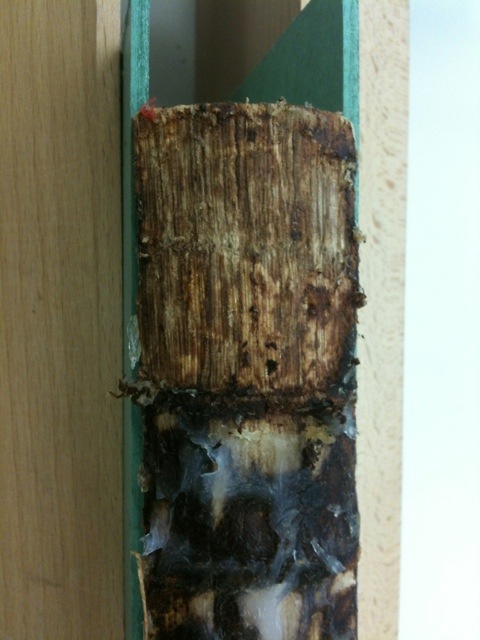 Then came the second fiasco, having removed the spine, it became apparent that the first two cords had come loose and the sewing, completely eroded, making all the sections loose at this point and the text bock began to split. Rather than resew the book, my tutor decided that it would be better to paste down the cords and hold it together whilst they dried, therefore keeping it together, almost like the modern perfect binding (a ridiculous name given the technique). 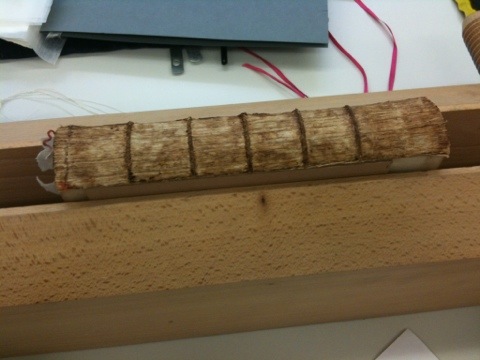 At the same time that all these problems were occurring, I was also able to consolidate the corners of the book boards and cover them with my specially prepared tissue, which, once dried, all looks okay. I will have to tweak the colour a bit and darken it and am practicing on some dummy boards at the moment, so hopefully they will not be so visible in the end. 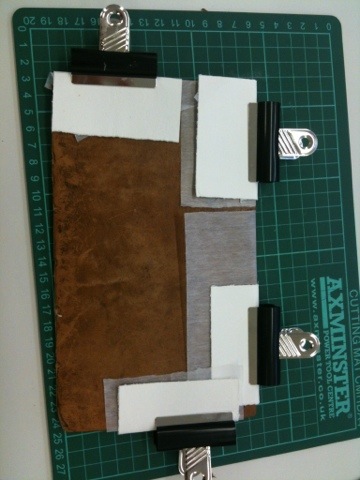 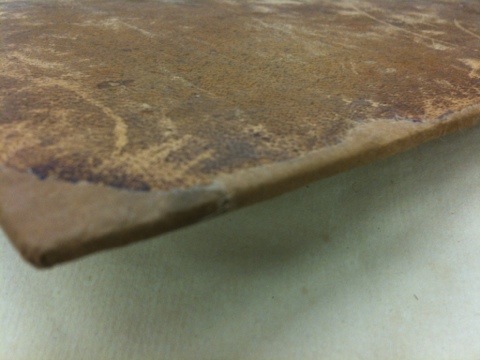 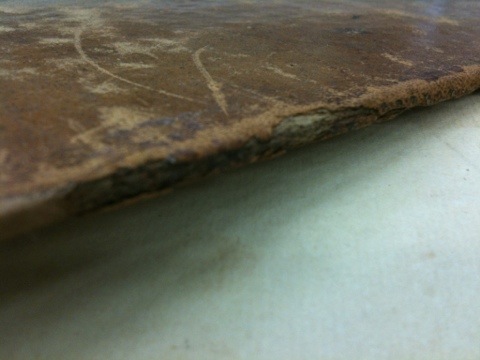 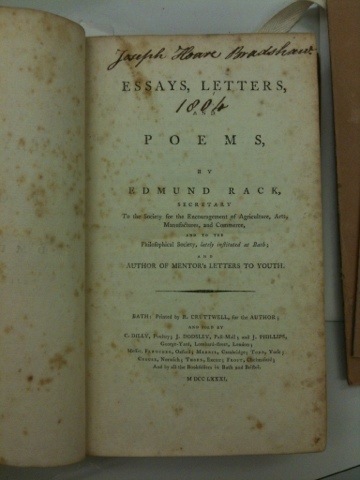 This is the book I am working on at the moment, it has been a few weeks now since I started working on this book, and I hope to finish it before Christmas if all goes well. There have been some hiccups along the way, but as of today, it seemed to be alright when I left it.

It has been a book for me to practice board reattachment, which is a series of lectures we have been having for the past couple of weeks. Here I am going to list the work I have been doing on the book for my journal and hopefully include some pictures of how it has advanced.
— 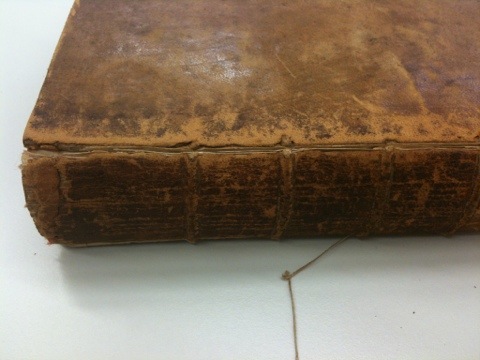 The book has both boards detached and a severely deteriorated spine, as you can see in the photograph, the end papers are detached with some minor paper repairs necessary. The end bands and end caps have also deteriorated and are no longer present, through there is some evidence of their initial present. A full account of the damage is in my documentation report.

The first step I was advised to take was to prepare some toned tissue for the repairs to the cover and also make any paper repairs. These included reattaching the end papers with the use of a japanese hinge on each side. This worked very well and has formed a discreet and strong attachment. 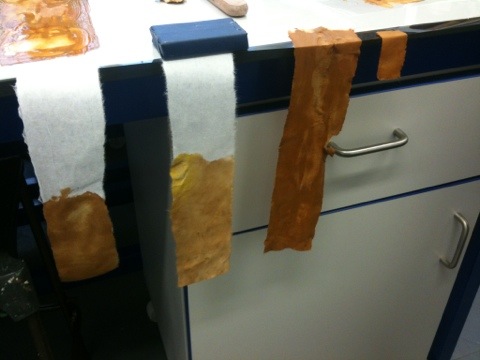 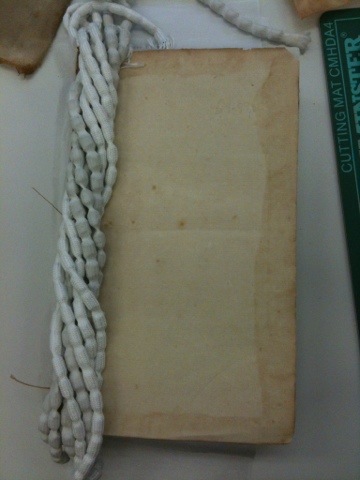