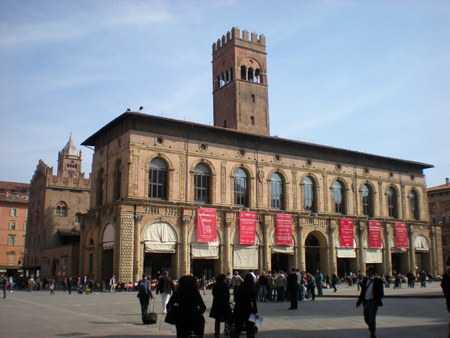 Well, it’s a little late, I know, but I wanted to do a small post on the Bolognia Children’s Book Fair, as it only comes round once a year, and it’s not the norm for me!

The fair, perhaps obviously, is a children’s book fair, and as far as I am aware, the only book fair specific for children in the world. It is a delight to go to, possibly more so than the London and Frankfurt book fairs, as given the target audience, the books are filled with colour and illustrations as far as the eye can see. I was attending the fair with my aunt’s publishing house, Picthall & Gunzi, and am not ashamed to be biased in claiming that their books were by far the nicest there!!

Of course the location is also a bonus point for the fair – we enjoyed several delicious meals in local area, and a fantastic drink in the square. The square itself is surrounded on all four sides by some fantastic architecture, which i have included some pictures of here. Quite a beautiful place to visit if you have the chance.

A great trip, and one I thoroughly enjoyed! Especially the three churches which were about 2 minutes away from one another and quite staggering! (see below…)