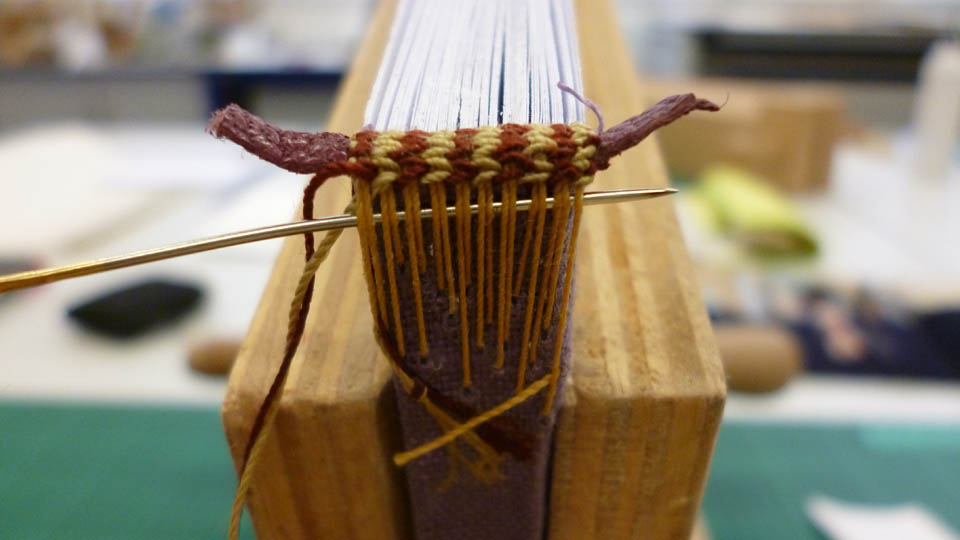 These instructions are to coincide with the Islamic binding lessons that we have been having with Kristine Rose from the Fitzwilliam Museum.

The two sewing stations must be prepared in advance of sewing as the paper is not good enough quality to work blind on the book, this can be done by piercing the paper or by scoring the stations with a knife. Commonly sewing was in yellow silk.

Sew the first two sections twice as it is not initially sewn off, then continue to sew using link stitches. For sewing off, make the final stitch a kettle stitch, so that it is secured.

Knock sections up between boards and put into a laying press.

Stipple a small amount of paste into the sections to stick initially, then repaste with stippling and put spine lining on and bone folder down. The spine lining should be an evenweave linen, commonly mauve was used.

Excess linen is to be trimmed and pasted to the book block. This will be hidden by the board attachments. The linen should only be a couple of millimetres either side of the spine.

End band cores should be the same material as covering, cut 3mm and just wider than the text block, these are to be glued up on the flesh side of the leather and moulded so that no fibres stick out. The cores should then be stuck onto the spine, adjacent to the spine and just hanging over either side.

Each section centre should then be marked.

Sewing of the endbands is done using three threads:

Primary thread – this should be a bright colour, often a gold, so that it can be seen in contrast to the other two. This is sewn through every section and over the cores, which creates the basis for the second two threads.

The tertiary then anchors the secondary at the other end, allowing the secondary to weave back through the primaries to the starting point. Once the tertiary has come back and two rows are complete, there should be a chevron pattern starting. These two rows are then shuffled along the primaries to sit on the text block, before the next row is started.

Tie down end band knots within the text block.

Trim decorative end papers just smaller than first sheet and wet before pasting. Paste just over the fabric on the spine and press. Once pressed, trim any excess decorative papers.

Paste and fan out text block threads onto spine.

Three boards are used per cover, which should be lightly wetted prior to pasting.

Boards are exactly the same size of text block in height, though not in width – Square up one corner of board and measure against cover of book, leaving a joint space at the spine, about the same size as the endbands, trim the boards to this size once pasted.

Leave boards sharp without back cornering them.

The foredge flap will only be the thickness of one board not three, and will be done when covering the book.