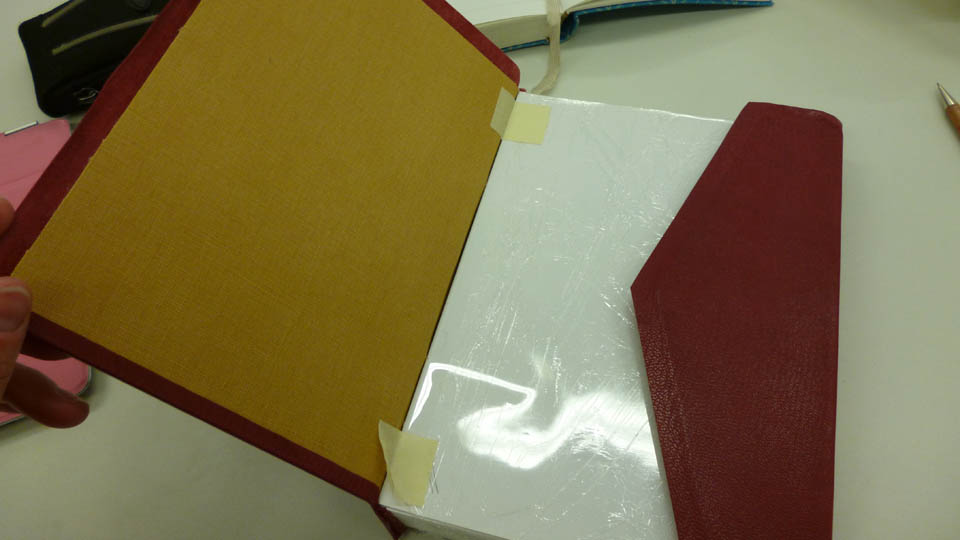 Last week, we were lucky enough to be visited by Kristine Rose from the Fitzwilliam Library in Cambridge, who is spending time teaching us Islamic bindings, their history, their structure and their necessary conservation. So here I will record what I have been learning as I go – it may be staggered.

Kufic bindings are the earliest script known, dating back to the 7th-10th century. They were commonly in landscape format, made with wooden boards and parchment text blocks. They were sewn using a link stitch.

The Mamluk manuscripts followed dating back to 1250-1517 in Sultanate-Egypt and Syria. These had paper text blocks with pasteboards and were elaborately tooled with individual hand tools. The Battle of Talas in 741is meant to be the start of paper in Islamic territories, as Chinese soldiers were kidnapped and forced to give up the secret of paper making to save their lives. It was a more refined structure due to paper and pasteboards though it remained a link stitch with a finer thread, and almost always using two sewing stations with single stitch – there were very few exceptions to this.

The Maghrebi style was dated from 922-1492 is small and square in format, looking like a standard Islamic style with heavy gold tooling and an envelope flap, however the board attachments at very different.

The Persian style of islamic binding dates back to the Safavid dynasties and Mongol ancestry (1501-1732). The bindings had decorative paper and leather inlays with extremely fine filigree. All the tooling was done by cold tooling as the leather was so thin and the paste boards, very receptive to the tooling.

The style of bindings made during the Ottoman period (1453-1924) were extremely refined bindings – both quality workmanship and made with the finest of materials and techniques. They were everything that the Persians were doing, but better and more refined in every way. At this time books were in abundance – everyone was expected to read or at least recite and understand the Koran.

The artists who designed the books used numerous techniques to decorate the smallest areas including burnishing, piercing. Filigree was used to decorate deblures, very intricately designed, cut and applied. There is some indication that the envelope flaps were used as page markers though not in every case. Binders in the Islamic world were very mobile, light materials and few tools, they would move about all over the place, working for different people.

The  Chester Beatty Library Dublin is the greatest collection of Islamic bindings outside of the east. There is evidence from Chester Beatty that the Islamic structures are often not case bindings as previously thought, though the inner join still remains quite sensitive. The  structure is not inherently weak as so many will suggest – if it used in the correct way – pulling it flat will damage the book, as it is not meant to be used like this and should be read with a rull for support.

Damage has often been caused by natural aging of materials.

Commonly the boards will delaminate due to the way they are made.

Often the books are rebound in a western style which will damage the book further, the paper is not as limp as western paper, they are sized and are very stiff, so the sewing has to do all the work, which is why putting the text block in a western binding, where the flexibility of the paper is relied upon.

Type II – claimed to be the most common, though not necessarily – most important difference to others that it is a case binding with the boards prepared separately to the book.

Turkish two piece – very similar to the above, though boards are prepared separately to the book though leather flanges extend over the spine.

Andalucian style – same silk thread and two sewing stations, spine lining is extended and non adhesives and secured with long stitches. End bands are adhered with a Chevron sewing pattern. The board attachments use the extended spin lining to attach the boards.

The majority of boards were paste boards, which were made using many different sheets of paper.

In some cases there is evidence of sewing onto fabric which has already been pasted onto part of the boards so that it would have already been in the correct place, then additional paste boards were added on the back of the initial one.