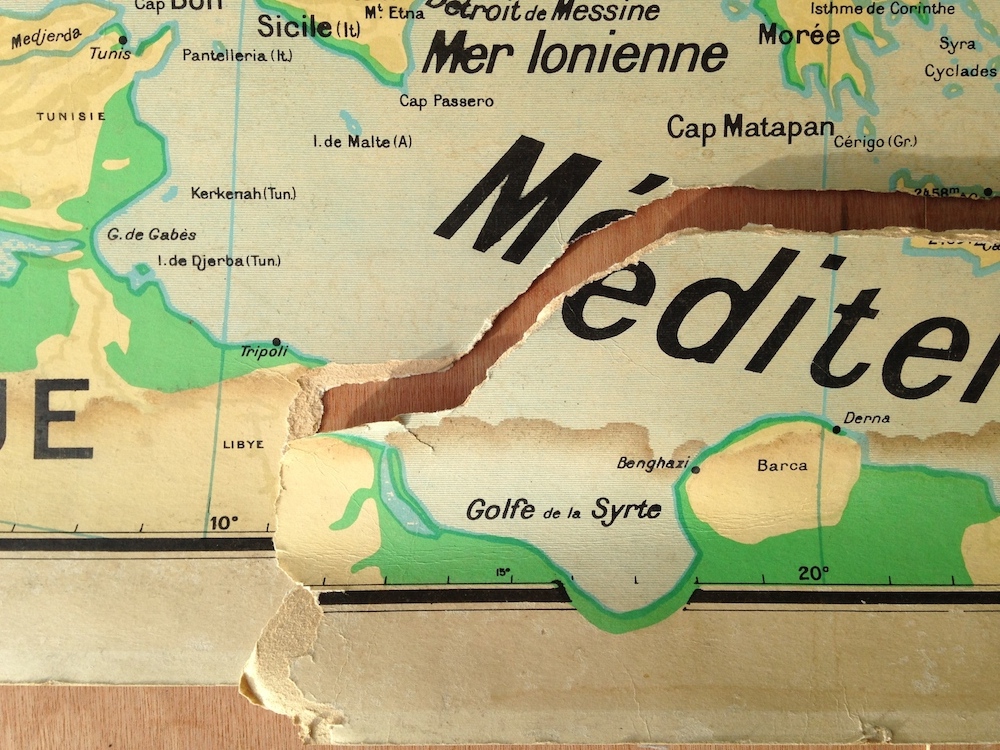 I am currently repairing this giant great map of France. Interestingly it has the same picture on both sides, the recto with text, the verso without.

As you can see there is a stonking great hole at the bottom to be filled in (I have the bit) and a substantial amount of staining to try and shift… All this would be a lot more fun if the blasted thing didn’t take up the whole hut.

The second part of my washing and bleaching post is more about the bleaching part. As mentioned in the previous post, this is rarely done in conservation as it is thought to damage the structure of the paper fibres and will continue to disintegrate the object if not denatured properly. As before we were also measuring the experiments as we went to see the difference in paper weights as they were cleaned.

There were three forms of bleaching we used in this session – Sodium Dythonite, Calcium Hypochlorite and Hydrogen Peroxide.

Sodium Dythonite at pH8
Conservators will us Sodium Dythonite to a certain extent, and will often prefer this solution, however it is often not removed totally and can leave a residue in the object. Similarly to this, conservators will often reuse this solution on the same spot many time over in order to remove a stain, however this repetitive use of the solution can be much more damaging than using a stronger one, such as Calcium Hypochlorite, to begin with and ensuring it is removed in full.

Calcium Hypochlorite at pH9 (bleach of choice)
This solution often has a bad name, though we have been told it does not diserve such a reputation. It is argued that chlorine may be left in the object after de-naturing it (washing through with water). This is chemically suspicious as chlorine is linked to calcium and the molecules are strong and generally stay together. Once the calcium is removed, the chlorine will have nothing to attach to and should come off as a gas.

Hydrogen Peroxide at pH9
When it is used on objects, it will bleach as it drys due to unstable H2O2 molecules, which will release the spare O as a gas, denaturing itself in the process. However a conference in Vienna argued that this did not always occur and peroxide was left in the paper causing continual damage, it is therefore no longer used.

We then used each of these bleaches, mostly the Calcium Hypochlorite, and tested methods of cleaning. Everything was done on the vacuum table, having first humidified the object, and thoroughly washing it throughout. We used small amounts on a brush to target small stains such as foxing, and also spraying specific areas by masking the object with melinex.

In the case of immersion, the whole page was put in a bath of Calcium Hypochlorite and then washed in water and left to dry.

This dashing man was the Rev. Samuel Parr, and is dated 1811. The media is machine printed, so not at risk from washing. The paper is a very nice wove handmade paper – at the time of the print, paper making machines were in use, but were still not making the majority of paper, this was still handmade. You can see from both sides that it is quite discolored and has a lot of reddish spots, known as foxing (this is believed to be iron content within the paper that rusts and bleeds out to the surface).