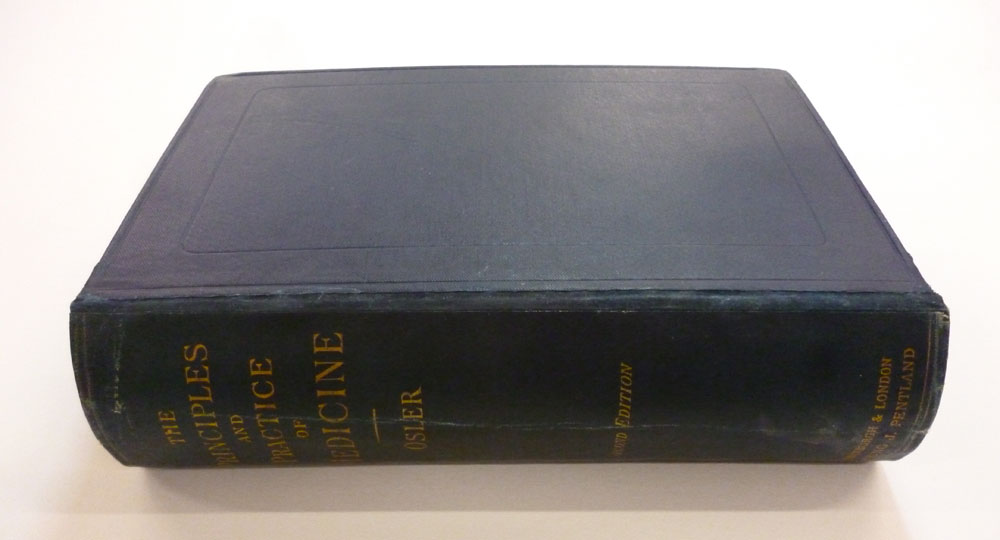 This is one of the first modern general medical textbooks by a man named Osler. My client, himself a Doctor, asked me to repair it as it is a family heirloom, originally belonging to his great Uncle, who was also a prolific doctor of his time.

BINDING The volume had sustained substantial damage to the spine covering, which was adhered to the boards by pressure sensitive tape. The spine itself was misshapen and weakened due to inserted material. Both boards were detached and had ware to each of their corners

TEXTBLOCK Several pages throughout the book had been damaged through general use and the endpapers were loose. The back endpaper had written ephemera on its adjacent fly-leaf, which had been damaged along the foredge due to the page being loose.

ADDITIONAL INFORMATION There was a substantial amount of inserted material, mostly newspaper articles associated with the relevant chapters within the book. These were causing the sewing along the spine to split. At the beginning of the volume were a selection of needles inserted into the contents page causing rust to the page.

As an interesting extra, the original owner had kept several needles, skewering them onto one of the first pages, with dates – unfortunately neither myself nor my client were able to ascertain what they were from – personally I would assume the worst and imagine they were weapons of death, but that may be wayward imagination. My client informed me that these days all medical needles are curved, whereas these were straight. 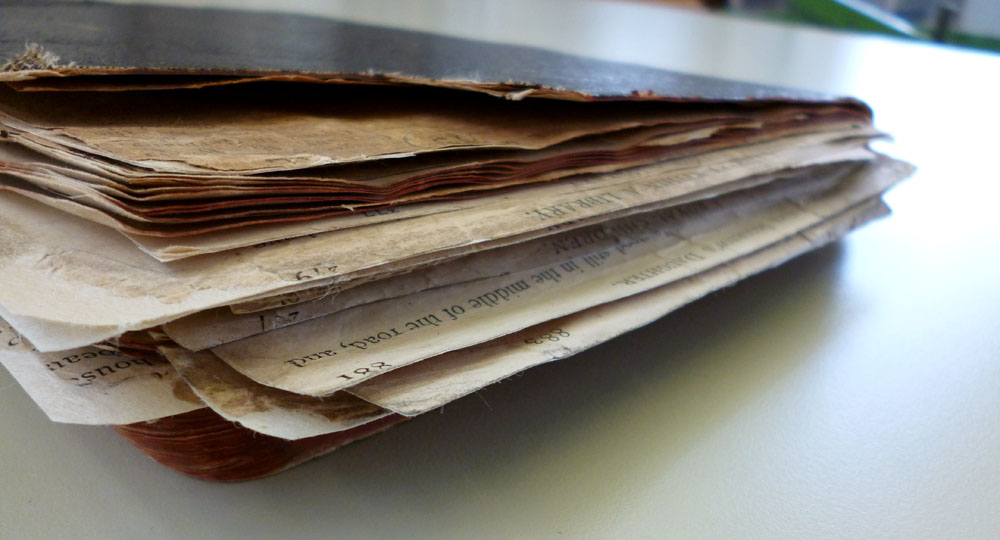 BINDING had structural stress due to large amounts of inserted material. The front board was damaged and detached from spine and sewing supports. The remaining spine was split from the front board and worn at head and tail. The first section was loose.

TEXTBLOCK paper had some tears and edge damage on first pages. Four pages had been torn out leaving stubbs remaining. The pastedown was detached along with the board, leaving an outside hook at the back of first section.

The conservation of this book is going well and picking up speed now, especially as all the paper repairs are done and dusted! The boards are now on, which worked well. I attached them with Japanese tissue that covered the spine and was stuck onto the inside of the boards. Normally I would try and split the boards, but they are so thin that to split them would almost definitely damage them further.

I have also lined the spine with some western paper, and will be sanding it down a bit to reduce the swell of the sewing supports, it wasn’t dry enough on Friday to do this.

Prior to rebacking a book, the edges of the boards always need to be compensated for the leather coming over from the spine. This is always a fiddly bit as the compensation pieces are invariably thin and spindly. I have done mine on this book with some of the freshly paired leather, as it is a good match.

The next step will to actually put the leather onto the spine, redo the corners a bit, and sort out the end papers and the book will be pretty much done – then for the enclosure for the newsprint! I have done a sample for this which I will post as instructions themselves, as it’s a great little enclosure!

As promised in my last post, this is a little more detail on my placement at the National Library of Scotland. I was hugely grateful to be accepted on this placement, as two weeks is never very long to get into a project and placements always require people to take out time to show you around the building and instruct you in various matters, so I am extremely grateful for the whole conservation team at the library for taking time out of their days to help and advise me.

Initially I was taken around the building itself and shown how the library works on a daily basis, as I mentioned before, it is a massive building – a bit like a tardis and much bigger on the inside than can be seen on the outside. The studio itself was on the 4th floor, with three additional disaster rooms throughout the library for use in emergencies. The Library’s disaster plan was far more organized than any other I have come across, even down to having work clothes and boots sized correctly for the disaster team members – I was quickly informed that the Library has suffered not one but three major floods, so their disaster plan is not only well planned, but has been accurately carried out as well, which is a great success.

The studio was a great space and sensibly laid out with desks for each conservator as well as larger communal work areas and a sectioned area for tooling and finishing and for board cutting.

I also spent a day at the second site for the library which is located at Site Hill on the outskirts of Edinburgh, where half the conservation team are based and carry out work using some of the more heavyweight and visibly dangerous looking equipment!! Like many of the bigger institutions, the NLS found that some years back they were spending huge amounts of funding on storage boxes, and decided to invest in a box cutter, becoming the first institution to have an onsite box cutter – this has made a massive difference to their work load and reduced the amount of work hours per box, therefore increasing the number of boxes it is possible to make per year – so much so that they now make boxes for some of the local institutions that don’t have the same equipment, similarly to the Metropolitan Archives, therefore making the whole process much more economically efficient.

Whilst in the studio I was given the opportunity to work on two projects, the first was the conservation of some maps from the St Bartholomew’s collection and the second was a box for a sculpture.

The Bartholomew collection is a donation to the library of the archives of an early 19th Century Map cartography company who produced and printed maps. The collection itself includes records held in bound volumes many maps. It was some of these maps that I was working on alongside the Bartholomew conservator.

The second project was the sculpture and was one of a series of anonymous sculptures left at various book associated institutions around Scotland. They are fascinating sculptures and often associated with the Scottish author Ian Rankin. They essentially adapt a book into some of the most intricate paper sculptures – really fascinating work in amazing detail. My job was to make this very fragile sculpture a box in which it could be safely stored. And I am quietly confident that none of the other sculptures will have such a lovingly and bespoke made box! – I will go into more detail on instructions in another post. It was made with board, plastizote and buckram book cloth.

In addition to the maps and this box, which did take me a while, I was also lucky enough to have a go at tooling and finishing. Unfortunately this is not something we cover at Camberwell, which I hope is something that will change in the future as I (and the NLS) feel that it is a necessary skill to cover. Having not done any before, I was understandably not let loose on an actual book, but I did have some instructions from three skilled finishers, who set me on the straight and narrow path to start and practice. As many will know, these skills have to be practiced to great extents as it is not something that can be perfected overnight. I will also go into more detail on this in a later post.

So all in all, a fabulous two weeks that I was thrilled to be able to do. A very big thank you to the National Library of Scotland and the conservation team there.

As mentioned in my previous post on the Eagle comics, Monday was the first day back at the V&A, and thankfully I was given the nice straight forward task of box making to start the year. The V&A boxes are not like those we worked on at MODA, which we made from scratch, these are almost entirely made for you before you start!

Having measured the books, the measurements are then put into the box making machine, and the boxes are cut flat as the image shows. The first step is then to put the rivets onto the edges, these are so that the box can be tied shut. The museum has an amazing machine that presses the rivets all together with a foot peddle – its so simple! 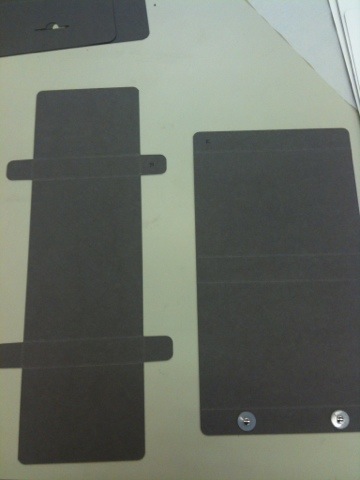 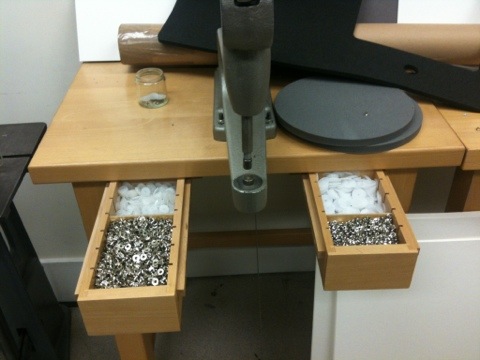 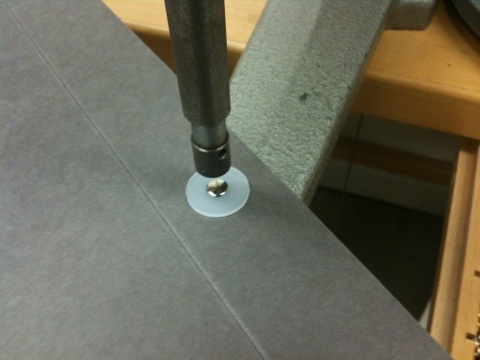 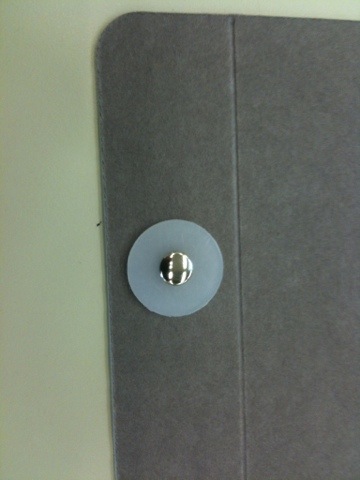 Then the string goes in which will tie onto the rivets, and then the two layers of boxes are adhered together with EVA and pressed to dry.

They are then folded and ready for the books! As I said, a super nice start to the year, and very therapeutic! Once I had done these, I was then doing some minor cover repairs on a couple of books that are going to be part of the Golden Spider Silk exhibition – I can’t say I enjoyed looking at these books, though I could appreciate the excellent hand painted drawings, however being of spiders, they did give me the shudders! 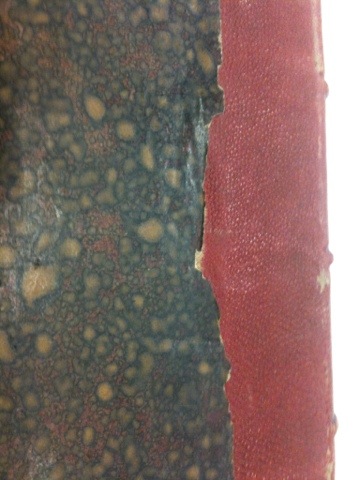 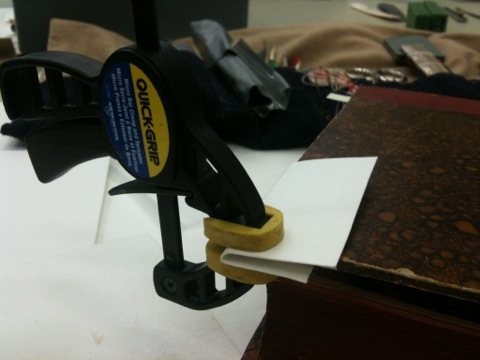 Over the past four weeks, and for the next two, four of us gals from Camberwell have been spending the day at the Museum of Domestic Design and Architecture (MoDA), where we’ve been making archival boxes for their library. The reason for this being that MoDA, and the part of Middlesex University to which it is connected, is moving (quite frankly this seems like an excellent idea to me, as its current location in Cockfosters, seems like the other side of the world after two hours on the tube!!).

Anyway, as any good trainee book conservator will know, books must be protected in a move, especially those which may be fragile in any way – this could be the cover, spine, boards, text block – anything really. So we’ve been making phase boxes for the badly damaged books and melinex wrappers for reasonable conditioned books with their dust jackets in tact. I’m still not that keen on these glued phase boxes, there seems too much margin for error, but I’m getting better at them.

The museum has a large collection of books on domesticity including cookery books, interior design, house keeping etc, many of which date back to the early 20th century, and some possibly earlier still. An excellent collection and great museum, well worth a visit if you’re in the area.

Here are a couple of pictures of the studio – I’m always a fan of seeing studio pictures. 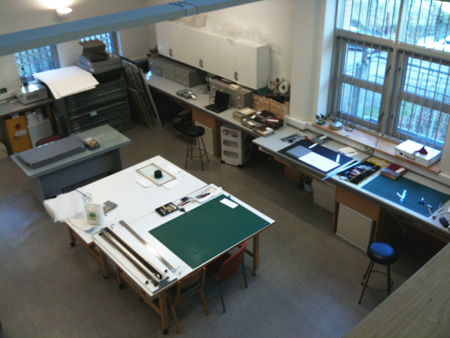 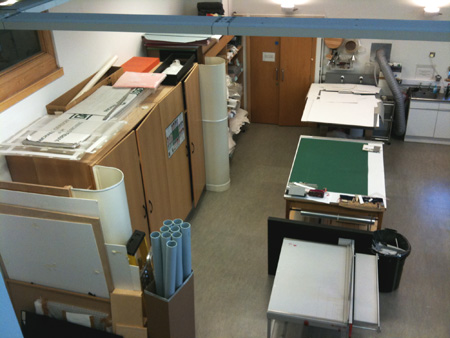