Skip to content
Afternoon everyone,
Sorry it has been a while since I have sent an update – we have had an Easter break and last Tuesday was the first week back, since then it has been London Book Fair madness. I thought I had better get this one off before tonight, as I am sure I will have more to show by tomorrow.
Last week saw the completion of my sewing sample, which I have to say I was reasonably proud of. It was a great exercise to do and gave us experience in other sewing techniques than the normal one we have used (the name escapes me!) 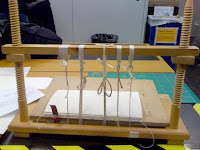 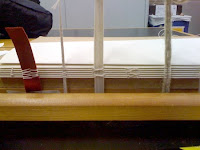 We had to use ‘sewing frames’, which you can see above – they allow you to pull the tapes/cord tight and technically should make it much easier to sew – though I think I may need a little more practice as getting your arms around them is quite a feat to master – mind you, I had a monstrous one, which I sure should be used for old monastic manuscripts and nothing else! 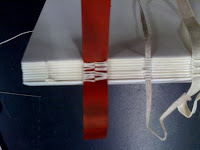 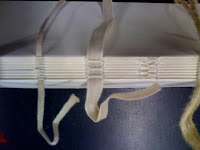 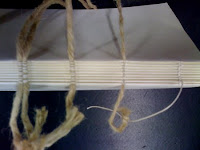 Here are some close ups of the sewing techniques used, we used cords, tapes, leather thongs (the red one) and at one point, just the thread! This was called a butterfly stitch – you sew as normal and interlink the sewing, so that they stay together – amazing!

Unfortunately, when attaching new thread, I connected it on the outside, which was wrong as it was visible, and I should have done it within the text block as the spine is exposed – oh well – you live and learn!