Skip to content
Well this week was a catch up week, which meant I was able to finish my ribbon book and my packed sewing sample.
The former was a little disappointing as when I stuck the ribbons down, they were rather tight and pull the cover back on itself quite a lot, so it took me a while to sort all this out and loosen the ribbons, and unfortunately that meant taking apart the cover a few times. So after all that, it is now looking like a bit of a worn out paperback and a bit scruffy. Mph.
The latter was also not great, but a bit more fun to do, and I’m not overly concerned with the lack of beauty. The problem was, that doing it using black pipe cleaners and black thread, is that you can’t really see all that much, and the fluff has a tendency to come through on the pipe cleaners. So overall on that one, its quite nice and colourful, but a bit amateur – won’t be using pipe cleaners again I don’t think. 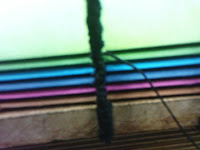