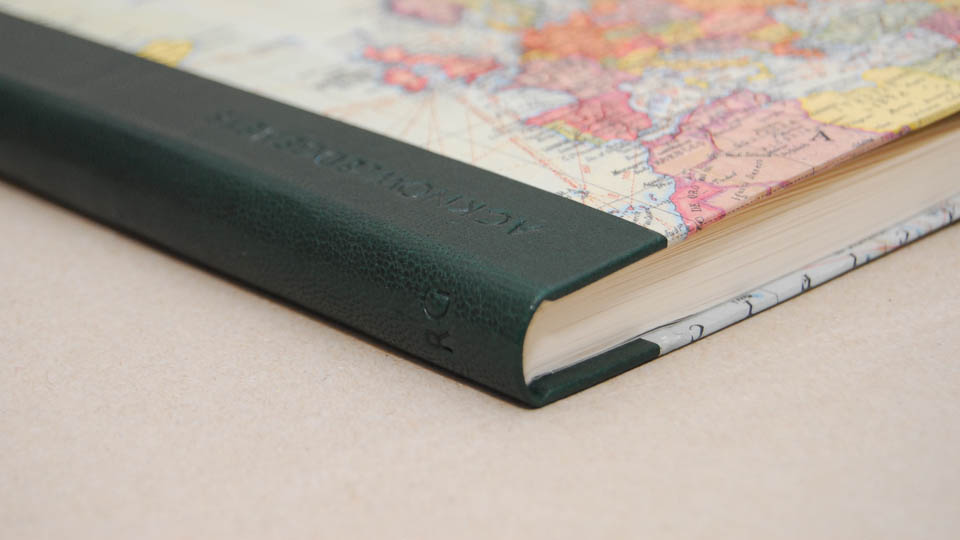 It had some unfortunate slip-ups along the way. All starting well with pairing the corners, which are tricky, considering their size. Maybe I got over enthusiastic or it was late in the day, but the corners were swiftly followed by me ripping the leather spine in half. Not to be dismayed by my lack of skill nor the fact I had no more green, I stuck it back together with selotape and continued to pair. Unfortunately the spine was to see yet more trauma when I tried out my very first blind tooling, and spelt the blasted word wrong – TWICE. It’s a stupidly long complicated word anyway.

So despite its obvious pitfall, I plodded on, and now have some pictures of covering the boards and the completed thing. Phew!!

First came lining the boards on the cover to bring them up to the same level as the boards plus the leather. Then I covered them using a very nice map wrapping paper from Stanfords.

Next came neatning up the insides of the book, which you can see above. Any excess leather and paper would look messy under the endpaper. Following this step I did line the boards as I did on the cover, but forgot to photograph that bit… And the final thing:

Hope she likes it! (better pictures will be added to the gallery this week!!)

One Reply to “A book for my sister”